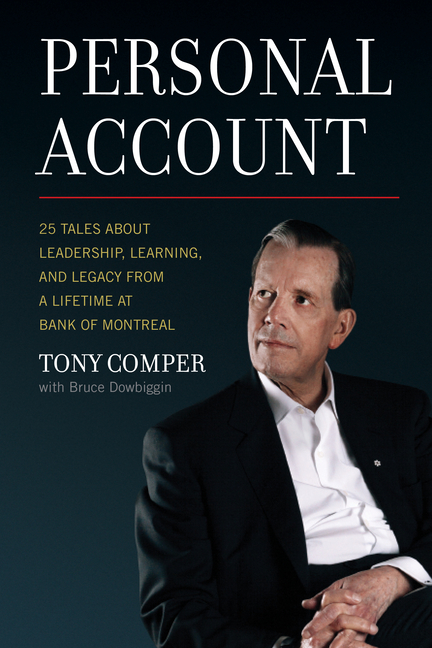 Personal Account: 25 Tales about Leadership, Learning, and Legacy from a Lifetime at Bank of Montreal

He spent 40 years at the Bank of Montreal, was the CEO and a part of the key group of people that developed the first ATM machine. He always had a willingness to share technology and systems in order to bring about larger change. Full of leadership lessons from the financial world, technology world, and philanthropy world.

After nearly four decades at Bank of Montreal, former President and CEO Tony Comper shares leadership lessons from his experience at the helm of one of the world's largest financial institutions. Anthony "Tony" Comper likes to say that he can sum up his remarkable career in Canadian banking in 25 stories. In a business often filled with big personalities and memorable characters, Tony's motto is Festina Lente -- make haste slowly. In Personal Account: 25 Tales about Leadership, Learning, and Legacy from a Lifetime at Bank of Montreal, Comper chronicles how he guided the bank's software evolution on real-time banking and the introduction of ABMs. He also saw BMO evolve from traditional lender to facilitator in the market, partnering with businesses to create a more vibrant source of capital. That innovation included Tony's role in integrating women and new Canadians into BMO while fighting anti-Semitism in the community. He was also critical in creating new banking models for the Indigenous community. A first-person analysis of the major transitions in his almost four decades at the bank. A memoir of turbulent, challenging times. An examination of surviving the most severe financial shocks without jeopardizing the nation's financial stability. Personal Account is equal parts warm memoir, teaching lesson, and a reminder of the value of legacy.

Tony Comper, CM (Toronto, Ontario), began working at Bank of Montreal at age 16, launching a four decade-long career that culminated first with his tenure as the chief operating officer, and then as the bank's chief executive officer from 1998-2006. Tony and his wife, Liz, were named members of the Order of Canada for their work with the FAST (Fighting Anti-Semitism Together) foundation.