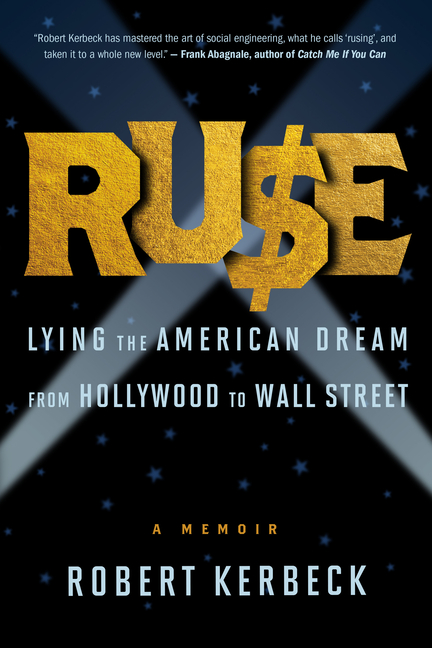 Ruse: Lying the American Dream from Hollywood to Wall Street

Social engineering, or scamming, is something I did at an early age. Robert Kerbeck has mastered the art of social engineering, or what he calls 'rusing', and taken it to a whole new level. --Frank Abagnale, author of Catch Me If You Can B-list actor, A-list corporate spy In the world of high finance, multibillion-dollar Wall Street banks greedily guard their secrets. Enter Robert Kerbeck, a professional actor who makes his real money lying on the phone, charming people into revealing their employers' most valuable information. In this exhilarating memoir that will appeal to fans of Catch Me If You Can and The Wolf of Wall Street, unsuspecting receptionists, assistants, and bigshot executives all fall victim to "the Ruse."

After college, Kerbeck rushed to New York to try to make it as an actor. But to support himself, he'd need a survival job, and before he knew it, while his pals were waiting tables, he began his apprenticeship as a corporate spy. As his acting career started to take off, he found himself hobnobbing with Hollywood luminaries: drinking with Paul Newman, taking J.Lo to a Dodgers game, touring E.R. sets with George Clooney. He even worked with O.J. Simpson the week before he became America's most notorious double murderer. Before long, however, his once promising acting career slowed while the corporate espionage business took off. The ruse job was supposed to have been temporary, but Kerbeck became one of the world's best practitioners of this deceptive--and illegal--trade. His income jumped from tens of thousands to hundreds of thousands to millions of dollars a year. Until the inevitable crash... Kerbeck shares the lies he told, the celebrities he screwed (and those who screwed him), the cons he ran, and the money he made--and lost--along the way.