Reframing the Future of Work: Why Diversity, Equity, and Inclusion Will Not Be Enough to Save Corporate America 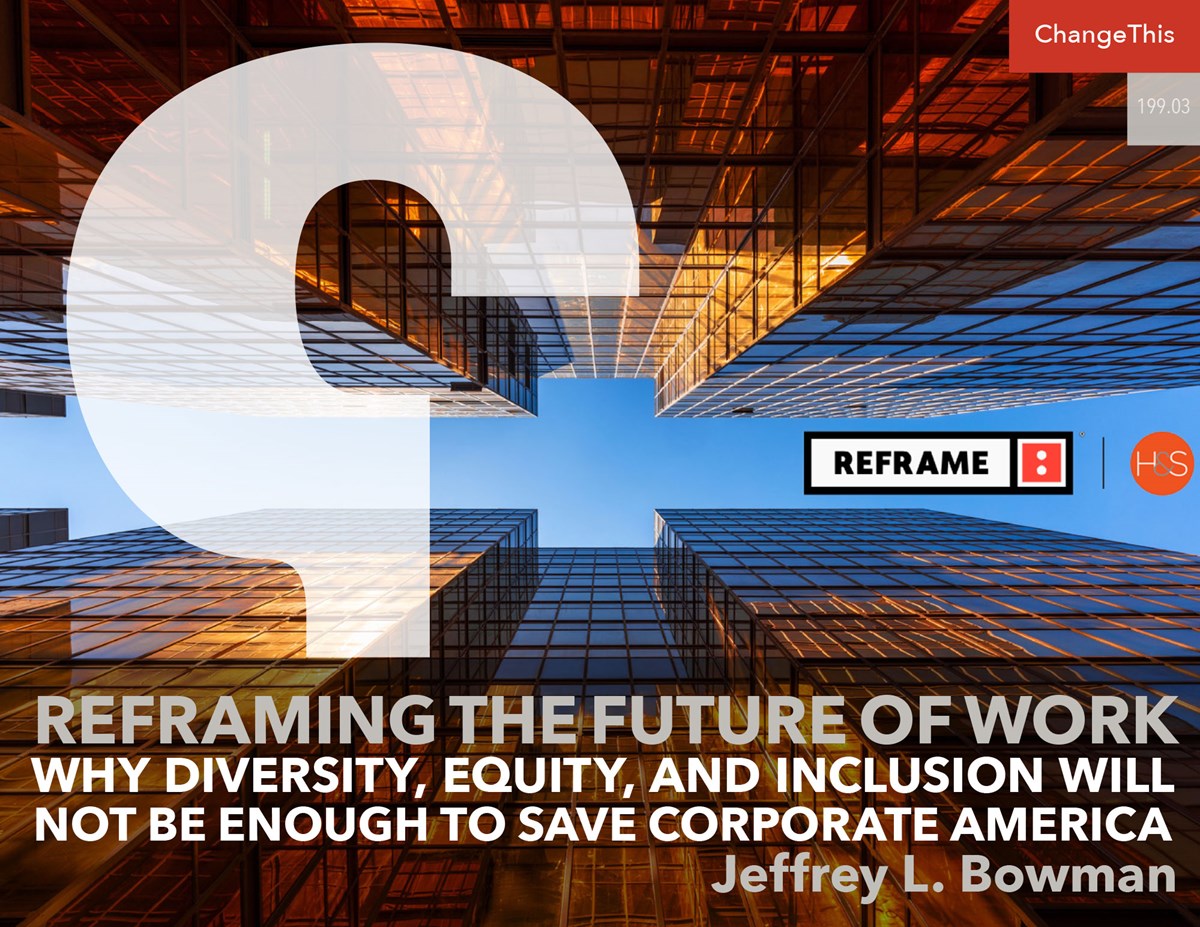 Corporate America and America, more broadly, are at a cultural crossroads as a result of a “Perfect Storm” of two pandemics that are afflicting the nation.

In some senses, we’ve been here before. However, this time feels different. The global COVID-19 pandemic and Black Lives Matter have forced Corporate America to come to grips with our nation’s fundamental social contract that binds society together and their role in upholding it.

The old approaches of Diversity, Equity, and Inclusion as a way of integrating Corporate America falls short of the mark. It may address the symptom from a racial standpoint but not the underlying cultural underpinnings that are essential to affecting meaningful change. Now is the time for Corporate America to introduce a change management approach to build a workplace for cultural inclusion with outcomes that are both sustainable and scalable. The first movers will have a competitive advantage against those who do not.

History is riddled with moments in time where America and Corporate America must re-evaluate its social contract as a result of cultural tensions permeating our society. This is in contrast with what needs to happen behind closed doors of Corporate America where their ideals, values, and mission must be revisited to advance change.

The last time America and Corporate America were at a similar crossroads was in 1966 during the Civil Rights Era. McKinsey, a global management consulting firm that helps Chief Executive Officers (CEOs) transform enterprise organizations, published a white paper “The Changing Face of Marketing.”[1] The topic: how enterprise organizations prepare for the rising of the Black middle class as consumers and, with integration on the heels of becoming a reality, the rising of the Black educated class entering the workforce.

Racial tensions were at a boiling point and a groundswell of pressure to desegregate society and build a more integrated social contract was running high. What this meant for Corporate America, structurally, was how they would approach Black talent.

History is riddled with moments in time where America and Corporate America must re-evaluate its social contract as a result of cultural tensions permeating our society.

Despite the formative efforts inside Corporate America at the time, in the Summer of 1967 after the Buffalo riots, Dr. Martin Luther King Jr. visited Buffalo and delivered his famous speech “The Future of Integration” and proclaimed: “We are moving toward the day when we will judge a man by his character and ability instead of by the color of his skin.”

In 1970, America and Corporate America began to accelerate integration and a new practice emerged on how to attract and retain Black employees. It was called the practice of Diversity.

Through history, we’ve recognized that the practice of Diversity became Diversity and Inclusion in the 1980s because Corporate America began to expand globally. Although race and identity were sufficient key performance indicators in American Corporations, they were forced to adopt the practice of Inclusion to attract and retain talent outside the U.S.

For many Corporations in the 1970s and 1980s, hiring a Diversity and Inclusion practice leader was a way to ensure they were being compliant inside their walls. Partnerships with Historically Black Colleges and Universities (HBCUs) picked up while Diversity and Inclusion practitioners provided guidance on how to integrate talent within the walls of Corporate America.

A CALL FOR CHANGE IN AMERICA AND CORPORATE AMERICA

What are the lessons learned and why has Corporate America been slow to change to reflect the New America? Unlike the 1960s and 1970s, people who were once referenced as minorities are now the majority source of talent. From this day forward, within the workforce, Corporate America’s talent acquisition strategy should lead with diverse candidates because of increasingly changing demographics.

Chief Executive Officers chose the practice of Diversity, Equity, and Inclusion as a way of integrating Corporate America racially, but not culturally. The practice of Diversity was first a compliance requirement—checking the proverbial box. Subsequently, with the expansion of Diversity practice to Inclusion, CEOs made their efforts a “commitment” at the end of the 1980s. Now, 60% of Fortune 500 companies have senior level officers/programs responsible for Diversity and Inclusion efforts (Huffington Post, 2017).

How do we re-imagine reframe Corporate America from the inside, out?

CORPORATE AMERICA IS TWO TO THREE GENERATIONS CULTURALLY BEHIND AMERICA©

Corporate America’s first ethnic affinity group, the National Black Employees Caucus, was formed at Xerox in 1965[2] followed by the formation of the Black Women’s Leadership Council (BWLC) in 1985.[3] An uprising at Xerox, when Black talent demanded the same pay as their white peers, became ‘ground zero’ for a new practice in Corporate America. In 1964, the CEO of Xerox and Black employees formed this first caucus group in order to address the issues of discrimination and creating a fair corporate environment.

Since the introduction and acceleration of having Diversity and Inclusion, and now Equity Officers, Corporate America has spent over $8 billion on this practice (Business Insider, 2020).[4] With 60 percent of Fortune 500 companies having Chief Diversity Officers and only four Black CEOs (Korn Ferry, 2020),[5] many argue Corporate America is more segregated now than the 1970s.

When CEOs want change, they deploy change management practices. Why has Corporate America been slow to change? In 2017, Reframe and Molson Coors partnered to get answers to that question. We asked over 50 brands and Reframe conducted over 300 one-on-one interviews over two years.[6]

When CEOs want change, they deploy change management practices. Why has Corporate America been slow to change? 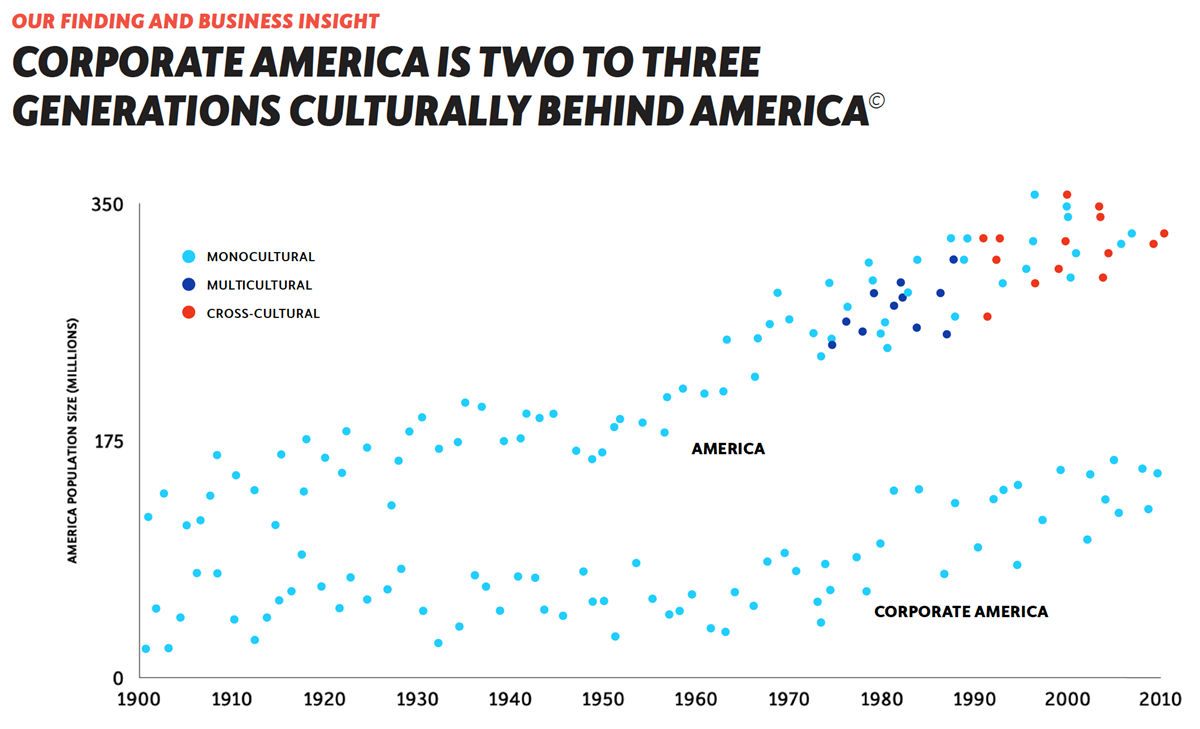 What Corporate America needs for the next generation is a Cultural Transformation that addresses structural and institutional barriers. Below are three reasons why:

HOW DOES CULTURAL TRANSFORMATION WORK?

A best practice with any change or transformation engagement is the idea of a maturity model. Reframe researched, developed and tested their award-winning Future of Work thesis to validate their hypothesis: “The Workplace is Two to Three Generations Culturally Behind The Marketplace©.”

The Reframe Cultural Maturity Dial™ is a proprietary attitude and behavior based assessment that helps Corporate America understand their level of current and future effectiveness for cultural change with actionable insights to help increase the return on human capital and diverse human capital. 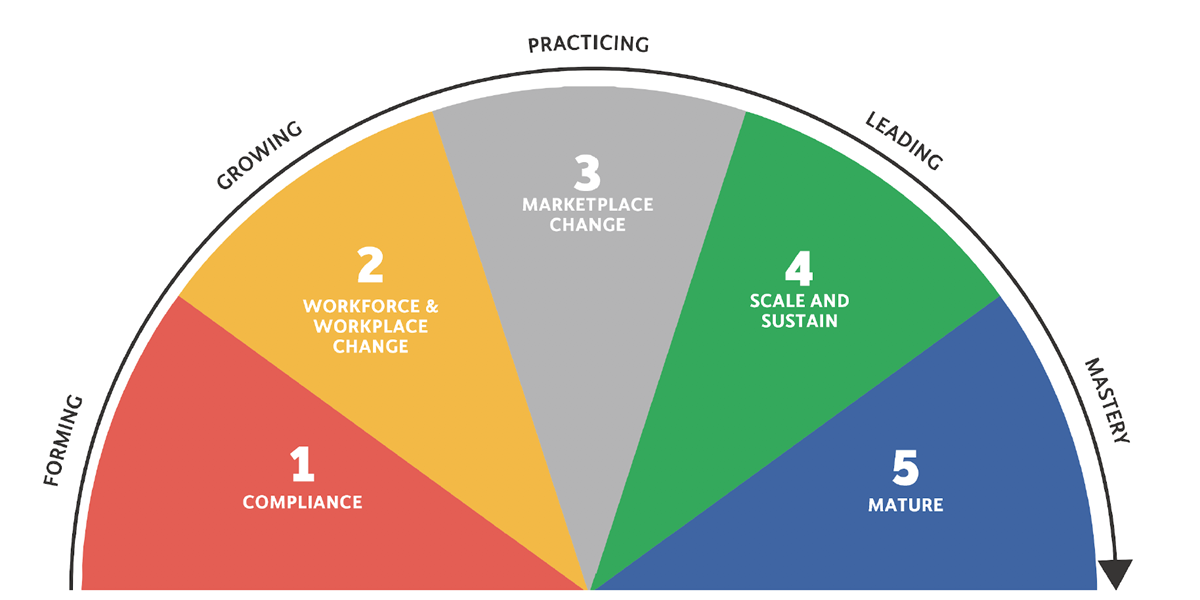 What Six Sigma is for quality, Reframe’s Cultural Maturity Model™ is for workplace culture no matter where employees work and live. The opportunity in the conversation between America and Corporate America is closing the cultural gap between the workplace and marketplace at the bequest of a new social contract.

In solving Corporate America’s problem, we have to first restate the problem. The workplace is two to three generations culturally behind the marketplace.©

Through a series of attitude and behavior-based questions, Corporate America begins to uncover institutionalized gaps by understanding the level of cultural maturity for their organizational Structure, Strategy, Segments, Systems and Solutions. First, a sample of the organization employee population is assessed, and senior leaders get the report out. Once resources and timing are aligned, a new employee experience is designed with technology as the enabler for delivering, scaling and sustaining the desired outcome of building a more culturally inclusive workplace no matter where the employee works and lives.

Jeffrey L. Bowman, a 2x award-winning Wiley published author, and former Madison Avenue advertising executive turned tech entrepreneur, is co-founder and CEO of Reframe: an enterprise software as a service (SaaS) company that helps People Leaders personalize the workplace no matter where they work and live by automating people operations.

As an employee working for some of the world’s largest companies, he recognized a pain point most companies struggled with: they knew more about their customers than they knew about their employees. This is the cause of low employee engagement and sentiment scores resulting in low return on human capital.

Bowman said that if he ever got the opportunity to change how companies personalize the workplace for all, he would.

Because of COVID-19 and Black Lives Matter, America and Corporate America are at a cultural crossroads,” said Bowman. “People Leaders are navigating the landscape while working from anywhere in the world. CEOs now have the opportunity to reframe the workplace and close the cultural gap between Corporate America and America.

He and co-founder Safraz S. Sears made the software platform because they recognized People Leaders had little data and visibility in real-time about the people they were being asked to lead. The need and approach was validated with Fortune 1000 companies Verizon, Prudential, Facebook, Xandr, Colgate - Palmolive, MillerCoors and other global brands across technology, media, travel & leisure, consumer packaged goods and financial services along with his award winning Future of Work thesis noted as “one of the most valuable contributions during the past 18 years” by Wiley.

Prior to co-founding Reframe, Bowman was a senior partner and managing director at Ogilvy & Mather in New York City. During his time at Ogilvy, he re-introduced the Total Market topic, pioneered a new marketplace change model that bridged the general market and multicultural marketing communications approach and led an innovative industry insights model called cross-cultural marketing. He also co-founded OgilvyCulture, the first global cross-cultural practice and generated $7 million in business within 3 years among global brands like Unilever, IKEA, Gap, MetLife, British Airways, Lenovo, BP and others. The approach Bowman pioneered was adopted by the +$700 billion global marketing and communications industry.

An award winning, 2X Wiley published author of Reframe The Marketplace: The Total Market Approach to the New Majority and a white paper, “Leadership, Marketing and the New Majority”. Other published works include: "The Cross-Cultural Report," "The Brand Cross-Cultural Index," "The State of the Total Market Industry Vertical," "How to Assess Your Organization’s Cultural Maturity," "Reframe Workplace Change Guide," and "Reframe Marketplace Change Guide." Bowman's work has been featured in The New York Times, The Economist, Fast Company, NBC (Today Show) and he speaks frequently at industry and trade events across the United States, Europe and South America.

When he is not "hacking workplace and marketplace change" for F1K companies, he enjoys being at home in New York with his two daughters. 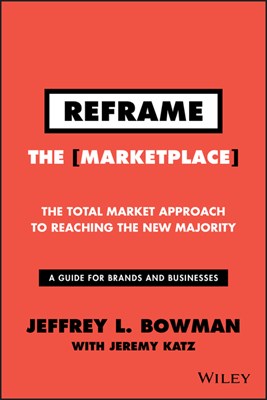 Reframe the Marketplace: The Total Market Approach to Reaching the New Majority