Nancy Duarte & Patti Sanchez have written a beautiful—in so many ways—book on change, and what it takes to bring it into your organization and the world.

Nancy Duarte makes a startling admission on the opening page of her new book:

As I grew into a leader, my lack of empathy was holding me back.

It was a strange and challenging situation to find herself in, because one of her jobs is to help her clients present ideas clearly and communicate effectively. And here she was with a clear picture of where she needed to take her own company, but unable to communicate it effectively enough to get buy-in from her employees, unable to connect that vision to how those within her organization saw the situation. She continues:

I struggled to create the connective tissue employees needed to understand how my new ideas would benefit them. They would distance themselves from my future because to them it felt it was solely my venture, not theirs. In turn, I was frustrated that they didn’t jump in with the reckless abandon I wanted.

Knowing I could not transform my organization alone, I had to learn new behavior and architect models for empathy so my team would jump in.

This is because, while change may be necessary, it can also be scary. Especially, as in this case, when business is good and the idea will disrupt business as usual. Enter Patti Sanchez, whose “gift is the ability to see things from another person’s perspective.” When Nancy brought her exciting new ideas to her, she immediately considered how employees would react:

The shift disrupted nearly every role in the organization and naturally caused some angst. Even worse, it came at a time when business was booming. The majority of our employees felt as if nothing was broken, so they didn’t understand why anything needed to change.

But this isn’t a book about Duarte, Inc. and the journey through all the ups and downs of their own change efforts. This is a book about what they learned on that journey, illustrated beautifully with diverse examples of change from many organizations and movements. Borrowing the words that head each section of the Foreward, in which the authors introduce their different perspectives in their own company's changes, shows how  “Leaders See the Future,”  but “Communicators Lead the Way.” It is on those two ideas, and the connection between them, that the book is built. It is both the ability to be a torchbearer for change, and an ability to compel fellow travelers to take the journey with you. It is the idea that, as a leader, you “don’t just anticipate the future … you also shape and bring it forth.”

It is what they call “The Torchbearer’s Calling.”

The future is a formless void, a blank space waiting to be filled. And then a Torchbearer envisions a new possibility.

That vision is your dream, your calling, and it burns like a fire in your belly. But you can’t create the future alone. You need Travelers to come along.

Yet the path through the unknown is dark and unclear. You have to illuminate the path for travelers. Torchbearers communicate in a way that conquers fear and inspires hope.

Some say being a torchbearer is a burden. Some say it’s a blessing. Either way, those who light the path are the ones who change the world.

Though there is a certain grandiosity to much of the language and imagery they use, they bring it all back down to the basics with very simple advice and instruction, such as how to “Use Galvanizing Moments to Keep Travelers on Course.”

Each stage in your venture is composed of a string of moments that marks progress while creating space for your travelers to breathe. In moments like these, speeches, stories, and ceremonies provide a welcome break from the grind of everyday activity. When you plan your strategy, identify these moments and think of ways to mark them. Put work on the back burner to allow travelers to come together and share communal experiences.

When people gather for a shared purpose and brush shoulders with one another, the effect can be magical.

It is in these moments that individuals feel what we all yearn for—a sense of accomplishment and belonging, of pride in ourselves and in the community we belong to. It is both self-affirming and self-expanding, and makes us feel as if our efforts are a part of something larger than our selves.

Duarte, Inc. is known for its presentation prowess and storytelling ability, so it’s no surprise that the book is brilliant on both scores. Being master storytellers, Duarte and Sanchez tell us how “Change has an identifiable pattern to it, and it follows the structure of an epic adventure, the oldest kind of story there is.” They teach you to map out that story and narrate it effectively for fellow travelers as you follow its familiar trajectory. Being masters of presentation, the book is perfectly laid out for leaders to use as a toolkit for change. (Chapter three is, in fact, entitled “The Torchbearer’s Toolkit.”) It is replete with charts and graphs and pictures that map the journey for you as a leader, so you can map it for yourself and your followers. They’ll give you lists, exercises, and immediate actions you can take, and case studies at the end of each chapter.

You’ll learn a lot along the way: How to structure and deliver a three-act persuasive speech, and what kind of speech to give, symbols to use, stories to tell, and ceremonies to have at different stages of the journey to communicate and solidify change. You’ll learn how a beloved grocery chain CEO was restored to power by his employees and customers after being fired by his cousin for trying to cover losses in it’s profit-sharing plan out of the company’s portion of profits, and how civil rights were expanded over a decades-long effort and movement that itself changed as the world changed around it.

So the moments and examples they pull from are wide and diverse, to say the least. In just three pages in the “Dream” chapter, they use the examples of Interface, a carpet manufacturing company, Lou Gerstner Jr. of IBM, cloud services company Rackspace, and Patrick Henry’s rallying cry for the American Revolution, “I know now what course others may take; but as for me, give me liberty or give me death.”

The book is impeccably laid out conceptually, too. Chapters four through eight are each dedicated to what they’ve identified as the five stages of the journey, which they’ve named: Dream, Leap, Fight, Climb, and Arrive. The journey starts with the torchbearer listening intently to those they hope to lead through change. But a listening tour to begin the process, though important, is not enough. That attention to others should continue throughout the process. Speaking specifically of the power of symbols and how to use them, the authors tell us that:

Symbols can have a powerful effect on business. In the blink of an eye, something ordinary can become imbued with meaning and charged with emotion. Symbols should not be imposed on an organization, though—doing so rarely feels authentic or meaningful. Instead, amplify existing symbols in a good way to tap into culturally understood meanings and messages. By observing what your travelers do when they gather and listening to the stories they tell, you can uncover the symbols that are meaningful to them. When you integrate those symbols with your communication you show appreciation for the sentiments they express by amplifying them and rallying everyone around them. But be aware that symbols have enormous power to both rally and rile sentiment, so use them with respect.

And if you can’t find it on the ground floor of your business, chances are that there is something in your company’s history that everyone knows and is proud of that you can recall. In the “Climb” chapter, Duarte and Sanchez use Starbucks as their case study. To reestablish their place as a “definitive leader in coffee,” when Howard Schultz returned as CEO, they recommitted to training baristas in the art of making a perfect espresso, began grinding beans in-store again, and launched new, more approachable blends that would appeal to more people. One roast, in particular, had a name that recalled the formative years they were harking back to with these change efforts.

They named this milder blend Pike Place Roast, after the first Starbucks store, located in Seattle’s historic Pike Place Market. It was a sign to partners (employees) and customers that the company was going back to its roots—a nod to the past while embracing the future …

This example, as so many others in the book, comes back to the simple instruction to “Understand what your travelers are feeling.” They bring it all home in the end with the story of how they at Duarte, Inc. made the biggest change in their own history based on this understanding. That makes it obvious that they’re not just espousing these ideas, but have enacted them, used them in the real-life implementation of real change, and can do so again—for their own organization and yours. 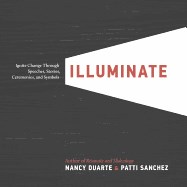