Andrew McAfee and Erik Brynjolfsson have written a book with real human intelligence, concern, feeling, and values, about how the second machine age is reshaping business.

I, for one, am deeply apprehensive about our new robot overlords. Business scholars Andrew McAfee and Erik Brynjolfsson have not necessarily made me less so, but their new book, Machine, Platform, Crowd, has given me a more comprehensive understanding of the terrain. The book is their follow up to The Second Machine Age, and it provides three lenses with which to view how technology is changing business today, and how we might use them.

From the rise of billion-dollar, Silicon Valley unicorns to the demise or transformation of Fortune 500 stalwarts, the turbulence and transformation in the economy can seem chaotic and random. But the three lenses of machine, platform, and crowd are based on sound principles of economics and other disciplines. The application of these principles isn’t always easy, but with the right lenses, chaos gives way to order, and complexity becomes simpler. Our goal in this book is to provide those lenses.

These three lenses—machine, platform, and crowd—have their counterparts: the human mind, products, and the core of one’s business. (The core is the “knowledge, processes, and capabilities that companies have built up internally and across their supply chains.”) It is up to you to figure out where on that continuum you are, and how you might begin to shift to take advantage of the technologies now at your disposal.

The authors compare the technological shifts happening today to the transition from steam power to electrification in factories a century ago. It was a time that saw that era’s industrial incumbents’ expertise in traditional manufacturing keep them tied to steam, as smaller upstarts electrified in intelligent ways that made them more innovative, flexible, and responsive to changes in the marketplace. The shift to electricity not only saved them 20 to 60 percent on coal, it meant they could power machines individually, rather than relying on a single steam engine group drive that powered the whole factory. This, in turn made it possible to experiment and iterate more quickly, and made electrified factories more productive. It provided, in other words, not just a cost advantage, but also a far bigger organizational advantage.

New machines, platforms, and crowds are rewiring the business world in similar, and similarly unpredictable, ways today. McAfee and Brynjolfsson don’t pretend to have easy answers:

This is not a how-to book, or one that lays out a detailed playbook for business success with machines, platforms, and the crowd. We suspect that people who offer such a playbook are kidding either themselves or their readers.

But there are broad principles of this change that you can understand, and you can begin to apply that understanding to your job and your organization. There is no perfect balance suggested between mind and machine, product and platform, core and crowd, but the world is certainly shifting in favor of the latter in each case.

Bigger than even the shift from steam to electricity, there is a “Cambrian Explosion” in robotics and artificial intelligence underway today that mirrors the original Cambrian Explosion of 500 million years ago, when most of the major life forms on Earth appeared. Due to this explosion, drones are not only likely to be delivering your packages soon, but they’ll be overseeing construction sites, monitoring the health and growth of farmers’ fields, and more:

It’s likely that drones will soon also be used by insurance companies to assess how badly a roof was damaged after a tornado, to help guard herds of endangered animals against poaching and remote forests against illegal logging, and for many other tasks.

Basically, wherever the work is, as McAfee and Brynjolfsson say, “dull, dirty, dangerous, or dear” (expensive), you’ll see automation and intelligent machines take over. And it’s not just manual labor that is being displaced. The way decisions are made in organizations is also changing. The authors think that, in most cases, decision-making should be taken from the HiPPO (highest paid person’s opinion) and turned over to machines—noting that it is important to monitor those decisions, to “look out of the window,” and see what is happening in the real world, and to counter the human biases that may be left intact or amplified by algorithms.

They also counsel us to predict less, and experiment more:

Among excellent companies a fundamental shift is taking place: away from long-range forecast, long-term plans, and big bets, and toward constant short-term iteration, experimentation, and testing. These organizations follow the computer scientist Alan Kay’s great advice that the best way to predict the future is to invent it. They do this in many small steps, getting feedback and making adjustments as necessary …

Some human minds no doubt can see the big picture and make great predications about the world. But they’re few and far between, and it’s probably best not to stake your company’s future on predicting the future.

Similarly, platforms are now ascendant over products because digital copies have become “free, perfect, and instant.” Making a copy of something in the analog world lowered the quality of the original work, which you already know if you were born before 1985 and you’ve ever made a photocopy, taped a movie with a VCR, or made mix tapes in high school. Digital copies don’t have that limitation. Wherever they can be deployed, they will be, and that is changing the economics of media, and much more beside it. It is why subscription music services are taking over album sales. Why pay for the whole album when you can just stream your favorite song?

The major innovation of ride-sharing companies is also actually a rather simple one in concept—replacing the human dispatcher at taxi cab companies with the intelligence of the smart machines we carry around with us everywhere. Not only do these platforms use the capabilities of all the smartphone offers us to connect people to services, and each other, in the real world, they do so in a way that helps correct the “information asymmetries” that have made markets less efficient. Suddenly, the person shopping for used cars has a wealth of knowledge at their disposal, the one hailing a ride can see a cumulative rating from those who have ridden with them before and see exactly where the nearest car is. Armed with that knowledge, consumers are much more likely to enter the market.

As these “online-to-offline” platforms continue to proliferate, they will also utilize assets more efficiently in the process, potentially reducing waste even as they increase consumption. So, someone may be less likely to invest in a used car that will sit idle 95 percent of the time if they can get a ride across town—or in Europe, with BlaBlaCar, even over long distances—on demand at any time.

The last contrast is between the core and the crowd. The best example of this is the difference between how professionals maintain and curate a library’s collection, and the way the internet has been constructed.

As the mathematician and author John Allen Paulos observed in the early days of the web, “The Internet is the world’s largest library. It’s just that all the books are on the floor.”

Google has largely solved that problem with their search engine—or, perhaps it’s more accurate to say that it continues to address that challenge as the content on the internet continues to grow. The other big challenge of the crowd, that of “fake news” and incivility, bullying and hate speech, has been an ongoing concern. But the authors see some hope in the principles and practices laid down in online communities like Wikipedia and Linux.

The authors broaden the conversation by explaining why the “crowd” operating system of a free market economy is a superior economic organizing principle than a “core” of central planning—leaning on Friedrich Hayek’s 1945 article “The Uses of Knowledge in Society” to do so, before digressing into the story of Linux, and the technical and organizational principles that it was built on, and why Wikipedia succeeded where their first, expert-oriented encyclopedia Nupedia failed.

It’s that many problems, opportunities, and projects, if not most, benefit from being exposed to different perspectives—to people and teams, in other words, with multiple dissimilar backgrounds, educations, problem-solving approaches, intellectual and technical tool kits, genders, and so on. This is absolutely the definition of the crowd, and it’s very hard, probably even impossible, to replicate within the core.

They explore the exciting opportunities and challenges of blockchains (smartly turning to Don and Alex Tapscott’s brilliant Blockchain Revolution), and take a look at the very future of companies and whether they’re even necessary organizing units of the economy any longer. They find an answer in Ronald Coase’s 1937 paper, “The Nature of the Firm.” They explain why managers are still (possibly even more) necessary today, why their numbers are increasing, and even present the two consistent features they’ve witnessed in successful, technologically sophisticated companies—“egalitarianism, especially of ideas,” and transparency.

We should ask not “What will technology do to us?” but rather “What do we want to do with technology?” More than ever before, what matters is thinking deeply about what we want. Having more power and more choices means that our values are more important than ever.

In addition to documenting the breathtaking advances happening in artificial intelligence and robotics, Machine, Platform, Crowd is also a crash course in the basics of business, with lessons on demand curves, network effects, price elasticity, total cost economics, and how they all interact in the marketplace. They clearly contrast the differences between different platforms and how their services plug into people’s real lives—explaining, for instance, why hailing urban rides is different than booking urban stays. To a businessperson on the road, ride-sharing can easily replace a cab ride, while Airbnb lacks the predictability and amenities offered by traditional hotels. It is, therefore, not a replacement, but a second product entering the market aimed mostly at tourists looking for a cheaper, and perhaps more authentic, experience in a city they’re visiting. Because of this, research has found that hotels catering to business travelers have been less affected than lower-prices options aimed at tourists.

The feats being accomplished by intelligent machines and algorithms are catching up to—even exceeding—the visions of sci-fi authors. I almost expected to get to the end of this book and read: “Not fully convinced? This entire book has been written by robots.” But, of course, it was written by Andrew McAfee and Erik Brynjolfsson, with real human intelligence, concern, feeling, and values. It is a big, intense, always interesting, and almost intimidating book—and well worth the effort. 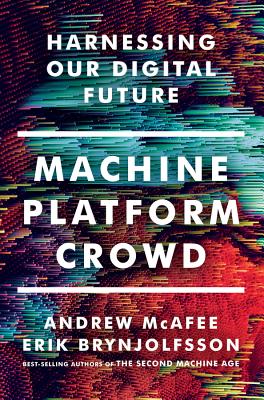