Mother of Invention: How Good Ideas Get Ignored in an Economy Built for Men

Katrine Marçal's new book shows us how gender bias has determined what technologies we have built, and even what we consider to be technology, undermining our ability to reach our full potential as human beings. It continues to be the case today, and it has never been as important as it is now to upend our ideas around gender to build a more balanced and sustainable world. 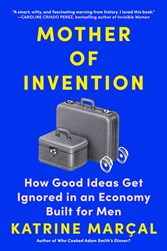 Mother of Invention: How Good Ideas Get Ignored in an Economy Built for Men by Katrine Marçal, Abrams

Katrine Marçal’s 2016 book, Who Cooked Adam Smith’s Dinner, leaves a lasting impression. It altered my understanding of economics and I still use what it taught me as a lens to view current events through. Fred Rogers’s mother told him to “look for the helpers” while watching difficult news stories. Marçal’s book taught me that those who undergird the entire system and help keep it humming along are often unseen, not even on the screen, and that we need to look deeper. The work of women has historically been hidden, relegated to a supporting role or unrecognized altogether, and has usually been unpaid (and is still underpaid even when it is the exact same work men are doing). Hopefully, we will continue to break down the idea of what “women’s work” entails and allow for a more fluid understanding of gender roles in our society and its division of labor, but gender will still exist, and our ideas around it will still interact with what we invent next.

So, Marçal’s new book uncovers how the history of invention and innovation has been affected by the dismissal and social disappearance of women. For instance, electric cars were invented at the same time as gas-powered automobiles, but quickly earned a reputation as a vehicle for women—mainly because they were quiet and clean—and were marketed as such. Then they disappeared for over a hundred years. We can only speculate about the effects—to the overall transportation system and with regards to our climate—if the electric car had not been feminized.

What we can say, however, is that few things shape our thinking as deeply as our ideas about gender. They influence which machines we choose to build.

And what future we are able to envision for ourselves.

The first two examples of innovation Marçal offers in the book, that of putting wheels on luggage and adding an electric starter in gas-powered automobiles, took far longer to catch on than they logically should have because they were seen as catering to women. Carrying heavy luggage and starting a car with a hand crank were both wrapped up in notions of masculinity—as was the very idea of greater mobility and unchaperoned travel. But inventions need not focus on catering to women; they should simply involve women and the contributions they have made to the history of innovation. We need to reinvent our world in a way that honors and enlists women’s efforts and understanding to reach our full potential as human beings. The technologies we’ve invented to birth and sustain life are literally softer (pottery, flax) than those we’ve invented to take life (bronze, iron), so there aren’t epochs or ages named after them, but they shaped our everyday lives as humans far more. As Marçal writes:

When women are removed from the narrative, humankind becomes something else. And so we continue, in this way, to deceive ourselves about our very nature. One of the gravest consequences of the patriarchy is that it makes us forget who we really are.

If we instead took those aspects of the human experience that we have coded as female and recognized them as universal, we could change our entire definition of what it means to be human.

The greatest threat to our individual existence throughout most of our history has been the world around us, and we tend to think of our greatest inventions as those items that were meant to overcome or subdue that threat. But that’s not the whole story, because the world around us is also our only source of sustenance and survival. If we’re going to sustain life on Earth, especially in an age of climate change, we have to use other tools, more malleable rather than male-able. We must learn a different way. Luckily, we already have it. We just need to change the narrative. Or, rather, we must tell the whole story. Reading books written by Katrine Marçal helps do exactly that. 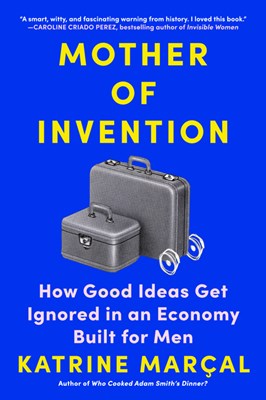 Mother of Invention: How Good Ideas Get Ignored in an Economy Built for Men