The 360° Corporation: From Stakeholder Trade-offs to Transformation

Sarah Kaplan explains why social responsibility, rather than being an add-on or ancillary consideration, must be baked into the business model. 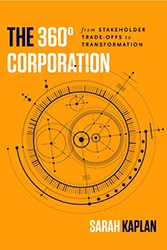 The 360° Corporation: From Stakeholder Trade-offs to Transformation by Sarah Kaplan, Stanford Business Books

Sarah Kaplan readily admits she “drank the total returns to shareholder Kool-Aid” in the 1990s. She even co-authored a book on creative destruction in 2001 that accepted market performance and shareholder value maximization as the proper—perhaps only—way to measure a company’s performance. She has broadened her scope since the turn of the century, and her new book—while similar to her first in that it challenges conventional business thinking and champions innovation—embraces the interests of all stakeholders, and instructs us on how to do the same.

The book stems from her Corporation 360° course—so named because it is designed to “look at the stakeholders that surround companies from all directions, all 360 degrees”—at Rotman School School of Management, where she is the founding director of the Institute for Gender and the Economy. She begins with the story of Walmart’s actions after Hurricane Katrina, mustering their considerable resources in the region to distribute food and supplies, for free, to those affected by the disaster, while ensuring employment for its affected workers and directly donating $17 million to relief efforts. It not only helped those on the ground but helped burnish what had become a tattered reputation. They were praised by everyone from local mayors and parish presidents to US presidents George H.W. Bush and Bill Clinton for their efforts, many suggesting that if the government had only acted as immediately and effectively as Walmart, the humanitarian crisis in and around New Orleans may have been averted. Not everyone was as impressed. As Kaplan notes:

More critical observers argued that the aid efforts were the least that Walmart could do. After all, the company had received millions of dollars of government subsidies through infrastructure assistance and tax rebates for distribution centers it had built in the area.

But, at a time when it was facing PR disasters from a scathing documentary Wal-Mart: The High Cost of Low Price, and press reports that many of their low-wage workers were on—or at least eligible for—public assistance (which has not changed; a 2014 report by Americans for Tax Fairness estimated U.S. Taxpayers subsidized Walmart’s low wages and benefits $6.2 billion in public assistance annually) Walmart came out looking great. Advertising Age pointed out that, after millions spent on corporate-image advertising trying to repair their reputation, the praise they were getting for their relief efforts was “the kind of advertising no marketer can buy,” and Walmart later announced that its “quarterly profits were hurt by a mere $.01 per share.”

It was a classic win-win. And with regard to the social outcome it achieved, it may not matter much whether Walmart was motivated entirely by altruism or an attempt to improve its image. But that is not always true:

In this case, perhaps we can deem Walmart’s decision as a no-brainer. But what would have happened if the interests of the shareholder and those of other stakeholders such as communities, workers, consumers, suppliers, and the environment had conflicted irreconcilably? This is the crucial debate for corporations of the twenty-first century—not just during crises but on a daily basis.

Corporations are being increasingly pressured by consumers, employees, and investors to pursue social-policy agendas. But after decades of shareholder value dominating economic life, it is baked into most business models. To include the interests of other stakeholders, those business models are going to have to change, and trade-offs between various interests will have to be addressed. To do so, Kaplan describes “Four Modes of Action for the 360° Corporation” and devotes a part of the book to each, examining them mostly through how two large companies with a global supply chain and presence, Walmart and Nike, have engaged in these issues. The four modes are:

Mode 1: Know your trade-offs. Figure out what the trade-offs are between all stakeholders, and be granular and specific about it.

Mode 2: Rethink trade-offs. Make the business case for change, and see if there is an action that can create shared value and mutual benefit—a win-win.

Mode 3: Innovative around trade-offs. Create new ways to do business that are of mutual benefit—in short, business transformation.

Mode 4: Thrive within trade-offs. Keep engaging with stakeholders even where there are no easily identifiable solutions that would satisfy incompatible interests.

Mode 1, an analysis of the various stakeholder interests and trade-offs, is always the beginning. Without identifying what conflicting interests there are in a company’s operations and outcomes, any subsequent action is likely going to fall in the favor of the status quo. One of the most common ways to do that in large corporations is through sustainability or responsibility reports, which have become increasingly common very quickly:

In 2011, only twenty of the S&P 500 companies produced sustainability or responsibility reports along with their annual reports to shareholders. In 2015, the figure was 81 percent.

But the reports themselves, while important for the transparency they produce, are not as important internally as the benefit that comes with the effort to really understand the issues, and creating meaningful measurements and goals around them.

Mode 2 is rooted in Michael Porter and Mark Kramer’s notion of shared value, while addressing its flaws—most notably its insistence that companies should only pursue social objectives when it is profitable for the company to do so. In fact, Kaplan spends more space on why it’s potentially “worrisome to turn over social agendas to corporate decision makers,” but insists that making the business case for change is another important step in the discovery process. The success of this approach is illustrated by Walmart’s insistence that suppliers of laundry detergent produce more concentrated formulas, benefiting both the environment by using less resources and creating less waste, and the companies by reducing costs and generating positive coverage and brand awareness.

There are also risks in making the business case for change, though, not only in focusing more on potential profits than justice, but because it doesn’t fit neatly into the narrative that the market system is inherently good at addressing the needs of society, and justifying something on social justice grounds creates cognitive dissonance that leans back in the direction of the status quo if immediate gains aren’t realized. Even when the evidence is overwhelming, as the business case for greater diversity and gender balance in leadership is, progress can be slow or stalled altogether. And…

Even worse, having to prove the business case may inadvertently imply that corporations shouldn’t be inclusive unless it can be proven that inclusion is better for the (still largely white, straight, and male) status quo.

And if the change in the status quo doesn’t lead to increased profits, there is a danger that it will be seen as a failure rather than being successful in delivering social justice in the workplace. Still, Kaplan does believe that the process of making a business case is an important part of discovering where various interests lay, and what the trade-offs are.

If there isn’t an obvious business case to be made, Mode 3 is to “transform the trade-offs into innovation challenges.” Here, it is important to innovate with stakeholders rather than attempting to do it for them. Here Kaplan dives deep into the garment factories of Bangladesh, which have been plagued by unsafe work conditions and low wages. Factory fires that we haven’t witnessed here since the Triangle Shirtwaist Factory fire of 1911 are still appallingly common, killing hundreds, if not thousands, and yet the reason production has moved overseas is largely because business models based on low prices forced production to places that don’t have the worker protections and higher wages won here after such tragedies. Nike comes in for a fairly equal amount of criticism for its past practices and recognition for improving labor conditions and environmental footprint through innovation in their manufacturing process and materials.

Finally, Mode 4 is about what to do when trade-offs are intractable. It is about how such impasses can lead to insight, and “finding ways to maintain and thrive within the tensions created by trade-offs” can be a good starting point to resolve them. Even long-term movement toward addressing urgent issues is better than ignoring them altogether. But this is also where more fundamental questions arise about if our desire for low prices as consumers and demand as citizens for justice are compatible—if consumerism itself and sustainability are compatible. Kaplan explains how organized outrage and anger can help, and why “defensiveness is the enemy of insight.” She looks at how we can use the power of the purse and protest to spur change (though the latter seems to have been more effective historically). She questions the veracity of corporate leaders’ claims that they’re simply delivering what the consumer wants, when it is their considerable advertising efforts that create those aspirations. Mostly, it is about how all these tensions create possibilities.

Social responsibility, rather than being an add-on or ancillary consideration, must be baked into the business model. There will still be trade-offs among stakeholders, but being aware of what they are and making them goals, even if long-term goals, starts a creative process. It defines the problems caused by a business’s operations as opportunities to engage and improve rather than externalities they can ignore. It is not a formula for perfection, but it’s a path to no longer being the enemy of the good. To manage competing interests, we must first know what those interests are, and that is both the goal of The 360° Corporation and its greatest potential:

If you follow your stakeholders, the disruptors may never catch up to you. To really make progress on addressing stakeholder pressures, companies will need to innovate in the ways they do business.

In that sense, even if it incurs financial costs and disrupts the way a firm usually does business, such change could become a source of competitive advantage, helping answer one of the most persistent questions in business, How can established, large companies learn to become more innovative? But that’s just the business case. It also aligns our leadership to more humane ends:

I’m not the only one to say that leadership in the twenty-first century is going to require a new set of skills, ones that are more about collaboration than authority, more focused on inquiry than answers, more about mobilizing talented people than instructing them, more about humanity and aggrandizement, more about conversation than rapid-fire decision-making.

And, in the end, it could realign our economics away from it’s obsession with shareholder value maximization and short-termism back toward long-term stability and sustainability:

My view of the 360* Corporation is one that radically changes the corporate and leadership models that have dominated for the last thirty years or so. My view is that true collaboration, real cocreation, honest conversation, and radical innovation can help us construct new economic models.

I overlooked this book when it first crossed my desk. I’m so happy I reexamined it. Social issues and our humanity are always going to be at the heart of business, because business can’t even begin to think about making financial profit without considering what social profit it might exist to make, what human needs or desires it might meet. At the same time, we might be desiring too much materially, and oversaturating the world with cheap stuff. We can either let those issues whither and stagnate within our organizations and society, or honor and improve them by looking at them honestly and clearly and talking about them openly. I believe Sarah Kaplan has contributed something great to the conversation. 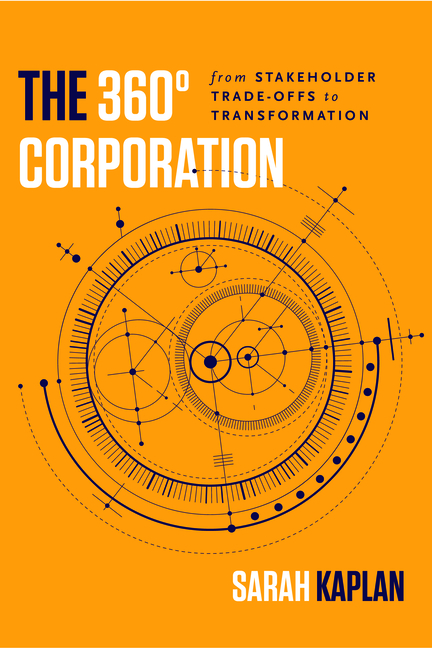 The 360° Corporation: From Stakeholder Trade-Offs to Transformation