"Women are perceived as either strong and cold or weak and warm. An award-winning journalist and cohost of PBS’s Amanpour and Company examines likeability and empowers readers to reject an outdated image of leadership instead of reinventing themselves." 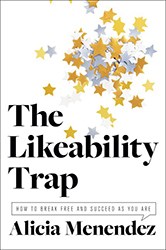 The Likeability Trap: How to Break Free and Succeed as You Are by Alicia Menendez, Harper Business

The last book I reviewed here was all about the benefits of likeability, how public figures construct it, and how to become more likable yourself. But here’s the thing: while being likeable really does improve your chances for success, being likeable is also a complicated conundrum, if not a double-edged sword, for women. Women are more well liked when they display traits that we are culturally conditioned to expect of them, like warmth and empathy, but as much as the best leadership literature of today suggests those very qualities are beneficial in leaders, we are still more likely to associate traits like confidence, assertiveness, and strength with leadership. And those are all traits that women are penalized for displaying—that, in fact, research suggests makes them less likable in the workplace. The truly depressing reality is that simply becoming successful makes women less likable. As Stephen Goldstein wrote in the book I reviewed two weeks ago and referenced above, The Turn-On:

This is true not just in public life, but in all of professional life, rooted as it is in a patriarchy that once excluded women from power altogether. It is a trap that Alicia Menendez devotes a vital and necessary book to, noting that:

Likeability, we are told, is integral to success. But ambitious women know, and the research supports the notion that the more successful a woman becomes, the less others like her.

Unlike Goldstein, however, she has dealt with the ramifications of that double bind personally, and so rather than just calling it out, she is calling on women—and all of us—to address it.

The Likeability Trap begins with Menendez’s admission that being well liked is something she has herself sought and struggled with her entire life. Chimamanda Ngozi Adichie’s TED Talk proclaiming that likeability is “bullshit” echoed and amplified her own professional experience, and helped her decide that she would care less about it. But, of course, it was not that simple or that easy.

There has now been a countless number of books about “authentic leadership,” or about “bringing your whole self to work” as an employee, and I think they are based on humane, well-intentioned, and well-researched principles. But once again, the reality on the ground does not reflect the best business literature and research on the topic. Because, when it comes to being a woman in the workplace, that advice is nearly impossible to implement. Not only are qualities like warmth (likeable) and strength (leadership material) still assumed to be antithetical to one another, the traditional workplace is riddled with other unconscious biases that don’t allow women to show up as authentically themselves. Women who aren’t assertive are told they are not enough, those who are are told they are too much. They are too often judged on style over substance, on how they are perceived rather than how they perform—and so they’re forced to manage others’ perceptions on top of their performance, which forces them to put on a kind of performance.

You can be told to bring your whole self to work only to realize what you probably already knew: that your workplace hasn’t done the work necessary to receive you, and so instead you must continue in ways big and small to “cover.”

That not only adds additional emotional labor to womens’ workload, robbing them of the psychological safety and ability to simply be themselves at work, it robs the organization of the diversity of voices and input that is so necessary to succeed today.

For women, and for anyone with a minority identity, being told to “be ourselves” at work feels a bit like a dangerous dare.

It is also too often entirely disingenuous, a subtle suggestion to conform to preconceived stereotypes rather than present one’s authentic self. The message is, “Don’t be complex and whole; be palatable and passable.” Palatable and passable usually means performing one’s identity rather than being one’s whole, messy self. Menendez explains how this has manifested in her professional life:

I am often given the impression—and on occasion am told—that I would benefit professionally from being more, to quote Cardi [B], “spicy mama, hot tamale,” and less Latina-ish Liz Lemon.

Unfortunately, such advice is almost always a suggestion that women need to “fix” themselves in some way rather than fixing the systematic bias and inequality in our organizations and institutions—indeed our very imagination.

Rather than reimagining leadership, we’re asking women to reimagine themselves. That is robbing all of us of the opportunity to create a model of leadership that is more expansive, includes more of us, and yields better results.

Menendez’s book, while being about a very specific topic, is wide-ranging. She discusses the “double jeopardy” black women face as a double minority. She dissects how differently sexism intersects with other minority identities, disability, and motherhood. She tells the story of Supreme Court Justice Sonya Sotomayer’s confirmation hearings, at which she had her judicial opinions “described by critics as ‘overheated’ and driven by ‘emotion,’” and endured Senator Lindsay Graham’s questions as to if she had a “temperament problem.” (Of course, when it came to defending Brett Kavanaugh during his confirmation hearing, it was his Graham’s own temper that flared alongside that of the nominee.)

It goes on and on. Women politicians are penalized when their appearance is discussed—as it nearly always is—whether it is discussed as a positive or negative, while men’s appearance rarely receives any mention, and doesn’t have a measurable effect when it does. Women pay a price for being ambitious. Men receive credit for it. Women’s anger is perceived to be irrational, emotional, uncontrollable, and internally motivated. Men’s anger is seen as a justified reaction against some external injustice or slight. Not only is there rarely any consequences for men expressing anger, it’s seen as a mark of competence rather than a lack of control. “Imagine what would happen if we punished men for their anger,” Menendez suggests, “and rewarded women for theirs.” Women are more likely to be underpaid, and more likely to be penalized for negotiating, even though that may be the only way to not be underpaid. The old adage that there is no harm in asking doesn’t really apply to women. Knowing they will be penalized, that they’ll be seen as difficult or ungrateful for the job offer, women often opt to either do not negotiate or ask for less than they know they’re worth. Raising a voice against such injustices often makes the woman who does so herself seem like the problem, and they’re counseled that the answer is just to be more likable. But, as Menendez points out, “Being “beloved” isn’t the same as being valued.”

It is also not a shield against the rampant harassment of women in the workplace, which Menendez doesn’t delve into as much as some other books, but does address on a more systematic level:

The consequences of that are positive and potentially profound:

We are not only questioning those in power; we are questioning the systems of power that have fostered environments of harassment and abuse.

likeability, as Stephen Goldstein explained in The Turn-On, is a construct. But, for women, it is a construction project that can limit how high they can rise. Menendez suggests women focus more on building self-awareness, reliability, and clarity. She explains how likeability is often a cover for unconscious or illicit bias, and how pursuing likeability is a privilege for those whose very existence and identity doesn’t clash with the status quo. At the end of the book, she has very concrete suggestions for “What We Can Do, as Individuals and as Organizations.” Because while addressing these issues requires organizational change, it needs individual advocates to bring them to the fore. She asks us to use whatever political capital we’ve been able to amass to raise up and advance women and alternate leadership styles in our organizations, to disentangle “leadership from traditional white masculinity.”

When it comes to the quest for likeability and adhering to traditional leadership models, perhaps we should all follow Timothy Leary’s old advice and “Turn on, tune in, and drop out.” 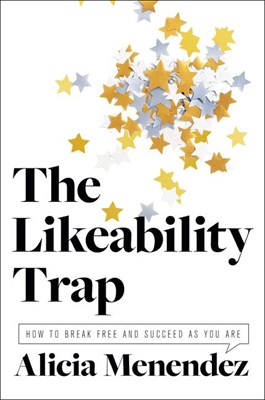