The Upside of Uncertainty: A Guide to Finding Possibility in the Unknown

The level of uncertainty we are all living through can feel debilitating. Nathan Furr and Suzanna Harmon Furr help us navigate it all by helping us understand that there are opportunities inherent in it, and giving us tools and strategies for opening ourselves up to and creating them. 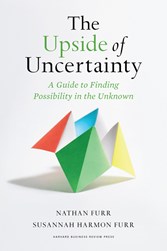 The Upside of Uncertainty: A Guide to Finding Possibility in the Unknown by Nathan Furr and Susannah Harmon Furr, Harvard Business Review Press

COVID-19 fatigue is real, as both a side effect that many who have contracted the disease have had to navigate for an uncertain and often frustrating amount of time, and as a collective reality that we have all been navigating as the pandemic persists and uncertainty around it reigns. How can we plan for the future—in our organizations, as individuals, as families and communities—when we don’t know what the next wave will bring? How can we make a five-year plan when we don’t know what will happen next week? Even formerly simple, more personal questions like if we should go out to eat or take a family vacation are fraught with anxiety-inducing uncertainty.

My wife and I said yes to that last question and took our kids camping in Tennessee last week. On our way to the mountains, we stopped in Nashville to see the kids’ older cousins, who both recently moved there after college. They are doing well, and it was great seeing them, but as we were leaving, I couldn’t help but worry about the uncertainty in the world they are entering. Two years ago, my biggest concern was that they were coming out of college into a weak labor market. (Studies have shown that the kind of job market you graduate into has a substantial effect on your earning power over the course of your career, and they were graduating into the worst pandemic in 100 years.) But, visiting just a few weeks after a rollback of reproductive rights in our country and amidst an extreme heat wave that is a harbinger of the kind of effects we’ll be facing as climate change progresses, I had even greater worries for them—and my own children—and the future they face.

I find myself wondering how we can create any stability on which to build our lives, and craving some—any—certainty about what is to come. That kind of certainty seems unlikely to arrive. All of which is why, the next time I send the cousins in Nashville some books, I will likely include The Upside of Uncertainty, and will stash a copy in the bookshelves at home for when my own kids are old enough to read it.

From the Latin root for “leap across,” it’s an old word worth reviving, which means to abruptly change something from one state to another. Every brilliant insight, choice, act, and innovation comes only after a phase of uncertainty. And the uncertainty brought about by every mistake, setback, discouragement, and even disaster carries possibility within in.

The authors are no Pollyannas. They understand that we all live though times of crisis and trauma that have very real consequences, that these times are not always easy to overcome and can leave lasting scars. But they help us develop the tools we need to survive and thrive in the face of uncertainty and adversity, to look it in the face and see possibility, a new ways of doing things, and reinvetion. As they write:

We are all wired to fear the downsides of uncertainty, but we forget that change, creation, transformation, and innovation rarely show up without some measure of it.

Yes, the ambiguity and uncertainty we face in life can be wildly disconcerting and unnerving, but there is also opportunity inherent in the unknown. The authors remind us that, while we tend to think of uncertainty as a potential loss, we can reframe it as a potential gain, as an opportunity to get creative, write new rules, and change things for the better, which we all know we need a lot more of in this world right now. Not only that, cultivating a sense of certainty in our lives sometimes eliminates our ability to take any risk at all, to be surprised and delighted by the unexpected, and to see new options and opportunities in it. Taking risks is an often-touted, needed ingredient of innovation and creativity. Without it, life can become dull or even downright depressing.

So, the book is a fast-moving, real-life-example-laden exploration of uncertainty and all it contains. Quotes and interviews from a diverse array of perspectives, from science fiction authors and psychologists to entrepreneurs and academics, come in quick succession, and every paragraph seems to contain something new. But it keeps an intimate consistency throughout. The authors break the book up into four broad sections on how to navigate uncertainty (“Reframe,” “Prime,” “Do,” and “Sustain”) but they move quickly through the many shorter chapters that make up those broader sections to keep the pace up, the mind moving and engaged. I think it is best to read the book from front to back to get the full measure of concepts and tools they share, but I found that anywhere I opened the book was accessible and applicable, so if you just start at the beginning to get the groundwork of their ideas, you can hop around to find what is most immediately actionable for you at the moment.

The beauty of transilience as a core concept is in its inclusion of transformation alongside resilience. It reminds us that we have the ability not only to come out of a difficult situation or time, but to have grown—as a person, as a company, as a community—in the process. This is something much deeper than the social media memes we were all bombarded with early in the pandemic to use our new “downtime” on some personal improvement project. Those seemed almost cruel in the face of the uncertainty, real trauma, and loss we were all experiencing.

The authors aren’t shy about sharing their own sometimes deep and personal struggles as individual people, partners, professionals, parents, and even expatriates (who moved to France where Nathan is a professor at INSEAD) throughout the book. One of the challenges they faced as a couple is the very story of how the book came to be. Nathan originally intended it as his fourth solo book, but Suzannah’s inspiration and imagination got the project moving and her ideas and addition as an author made the book more whole and accessible to those outside a management context, which is important because uncertainty is universal to the human condition. Another challenge they encountered was as parents, when their son had a mental health crisis as they were wrapping up the final edit of the book. The story of their need to act as caretakers to him as they brought the project to a conclusion is heart wrenching, but their openness and ability to share stories like this from their own life and work within the work itself helps us understand that they are practicing what they preach, and that it is always a work in progress:

We are still moving. We are figuring this out. Possibilities are coming.

In an uncertain world, it is a privilege to be able to stake out some stability, something that feels certain. But when we use that privilege to step into the unknown, to embrace uncertainty and the creativity it can unleash, we have a chance to change things—and ourselves—more profoundly for the better. It is in that give and take, that underlying dichotomy or paradox between the unknown and our ability to influence it, that I find inspiration. Perhaps my favorite quote from the book is from Jungian psychoanalyst James Hollis, that:

“The world is more magical, less predictable, more autonomous, less controllable, more varied, less simple, more infinite, less knowable, more wonderfully troubling than we could have imagined being able to tolerate when we were young.”

It sometimes seems more than we can tolerate right now, as the many crises we face seem to converge upon and compound one another. But if we learn to embrace the uncertainty in life and see it as an opportunity to grow and change, we can act with agency, intention, and a greater understanding. There is so much change needed in the world, it can seem daunting, but the only real place we can start is with ourselves and work together from there. Nathan and Susannah provide real-life tools and a good example for doing just that. The Upside of Uncertainty: A Guide to Finding Possibility in the Unknown