"Focusing on those left behind during an era of unprecedented economic growth and increasing income inequality in places like Nicholas Kristof’s hometown of Yamhill, Oregon, Tightrope’s most powerful moments are in the stories of individuals struggling to get by—incarcerated, addicted, and, like 60 percent of all Americans, in debt." 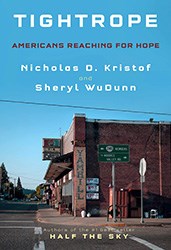 For too long, there has been a chorus coming from the more well heeled corners of our society that, to fix our problems, we simply need to run our public institutions more like businesses. We need to rein in wasteful spending, the thinking goes, and insist that government agencies, our so-called entitlement programs and public schools—and the people who use them and run them—need to be held more personally accountable.

I am all for accountability, but the problem with that narrative is that the economically advantaged have become the least accountable people in and to our society. Big banks were bailed out in the great recession, while the subprime loans they handed out to precipitate the crisis went into foreclosure and forced millions out of their homes. Not only did nary a banker go to jail, most that led us into the crisis kept their jobs. The narrative of personal responsibility is focused not on asking those with the greatest means to contribute to the greater good—to act ethically, or to pay their fair share of taxes—but on a disdain for the poor, which many politicians capitalize on by casting poverty as a moral failure of individuals rather than a moral failure of the society and economic system that allows it.

This kind of hypocrisy is put front and center in Nicholas Kristof and Sheryl WuDunn’s new book, Tightrope. As they note:

The public frets about cheating with food stamps (the fraud rate is about 1.5 percent) yet doesn’t realize that zillionaires hide assets abroad and thereby deprive the Treasury of some $36 billion a year in taxes—enough to pay for high-quality pre-K and day care for all.

Focusing on those left behind during an era of unprecedented economic growth and increasing income inequality in places like Kristof’s hometown of Yamhill, Oregon, Tightrope’s most powerful moments are in the stories of individuals struggling to get by—incarcerated, addicted, and, like 60 percent of all Americans, in debt—in many cases the very people he grew up with. It tells the larger story of how, after generations of upward mobility, the middle and lower classes have stagnated and begun to fall further behind. The authors cite Gordon Berlin, who studies poverty, to discuss one very real reason why:

If wages had continued to grow since the 1970s proportionally with the economy as they had in the post-World War II period, the average wage for a male full-time non-supervisory worker today wouldn’t be $43,000 a year, but closer to $90,000.

Those gains have instead gone to the already extremely wealthy, who have not only secured the wealth but also the narrative. So, somehow, universal early childhood education is seen as unaffordable, and the universal healthcare that every other advanced economy provides is painted as the beginning of a slippery slope into a socialist nightmare. Food stamps and rent assistance for the poor are seen as wasteful spending, but subsidies for private jets and mortgage deductions for yachts are not, nor is locking up the poor in (increasingly private, for profit) peneteneries. To make matters worse, because those prisons are now too often operating with the goal of turning a profit instead of turning people’s lives around, they lead to even worse outcomes:

In Pennsylvania, the corruption was explicit: the owner of private juvenile detention centers paid hundreds of thousands of dollars in bribes to two judges who then found youths guilty and sentenced them to his centers.

Meanwhile, the authors note, around “80 percent of Americans addicted to opioids began with prescription painkillers, not with illegal street drugs,” yet the Sackler family that owns Purdue Pharma is worth some $13 billion based largely on the sale of oxycodone that began the modern opioid epidemic in this country.

Without much discussion, we have created a two-tier justice system. If you shoplift at the grocery store, you can be carted off to jail. But if you steal tens of millions of dollars from the tax authorities or fraudulently peddle dangerous drugs from a corporate suite, you’ll be hailed for your business savvy.

All of that is beside the fact that those hailed as job-creators in the past are no longer creating all that many jobs, and have been offshoring or automating away those that once supported entire communities. But Kristof and WuDunn are not here to blame the rich for our ills any more than they are to blame the poor.

It would be easy but too simplistic to blame just automation and lost jobs: The problems are also rooted in disastrous policy choices over 50 years. The United States wrested power from labor and gave it to business, and it suppressed wages and cut taxes rather than invest in human capital, as our peer countries did. As other countries embraced universal health care, we did not; several counties in the United States have life expectancies shorter than those in Cambodia or Bangladesh.

The fact is, even though we still see America as the land of opportunity, opportunity is now largely determined by where you were born and who your parents are.

[W]hen you can predict wretched outcomes based on the ZIP code where a child is born, the problem is not bad choices the infant is making. If we’re going to obsess about personal responsibility, let’s also have a conversation about social responsibility.

It is also true that governments, state and local, still hand out billions in entitlements. So, let’s consider the facts:

Oregon awarded Nike $2 billion for five hundred jobs, or $4 million per job. Meanwhile, Louisiana paid $15 million for each of the fifteen jobs with Valero Energy. In 2013, Washington State granted Boeing subsidies worth $8.7 billion over sixteen years, the largest subsidy in history for a company. By late April 2016, Boeing had laid off 5,600 workers.

And, while welform reform may have lessened the number of individuals on the state dole as corporate subsidies soar ever higher, even the most successful individuals and companies shirk their own responsibility:

Amazon paid zero federal income tax in 2018 despite profits of $11.2 billion; indeed, it managed to get a $129 million “rebate” from taxes it didn’t pay. That’s an effective tax rate of negative 1 percent. Something is wrong when America’s working poor pay taxes so the federal government can make a payment to an e-commerce giant owned by the world’s richest man.

Meanwhile, the rest of what we consider the advanced world is doing things much differently.

Somehow, McDonald’s is still able to operate and make a profit. Business works best, and benefits society the most, when the playing field is level and interests are more balanced, when the free market is actually free and fair, and promotes individual freedom and flourishing. Silicon Valley was built as much by the government investment in the technology sector as it was by the entrepreneurial spirit of individuals. The upward mobility that marked America as the land of opportunity has always been the result of government investment in working people and their children, and working people’s lobbying for a better deal, much more than it has been determined by the personal wherewithal of business owners or private charity of wealthy individuals. Creating an economic system that generates widespread prosperity is dependent on investing in the overall economic health of everyone and every American community. Kristof and WuDunn offer a series of big steps we can take to get started doing that again. These kind of investments “may seem like entitlements,” the authors admit, “but actually are long-term capital investments in the country’s human infrastructure.”

The education benefits in the GI Bill of Rights helped create a nationwide foundation of human capital in America, just as the interstate highways then under construction created a physical infrastructure. Both kinds of investments are crucial platforms that can help unleash market forces, just as in the nineteenth century new railroads spurred economic growth and mass education spawned cross-country entrepreneurial activity and vaulted America to the top of the world.

I began by bemoaning the idea that we ought to run the country like a business. I think that holds especially true if we’re talking about businesses like private prisons or Purdue Pharma. But the best business literature today speaks of the need to invest in people and the infrastructure they rely on to succeed in their jobs, to lead with empathy, to foster real human connection, innovation and creativity, to the need for and benefit of cognitive and demographic diversity. The authors ask that “Americans show generosity not only in private charity but also in public policy.” If we can begin having the debate on those terms, I’m all for running the government and other public institutions like a business. 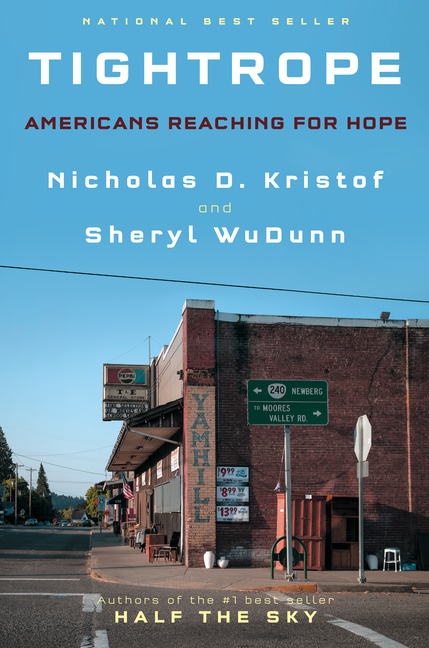