The Hidden Kingdom of Fungi: Exploring the Microscopic World in Our Forests, Homes, and Bodies by Keith Seifert, Greystone Books (JAG)

In this illuminating account, esteemed career mycologist Keith Seifert reveals the important role that microscopic fungi, including yeasts, molds, and slimes, play in our lives, all while remaining invisible to the naked eye. Divided into sections, each one exploring a different environment where fungi thrive, The Hidden Kingdom of Fungi introduces readers to the fascinating world of mycology, with awe-inspiring information about:

Despite their many benefits, we hold a precarious relationship with fungi: fungal diseases lead to over 1 million deaths each year, and they have played a destructive role in disasters ranging from the Irish Potato Famine to possibly even the extinction of the dinosaurs. The Hidden Kingdom of Fungi urges us to better understand our relationship with fungi—and to plan our future with them in mind—while revealing their world in all its beautiful complexity.

My Moment: 106 Women on Fighting for Themselves, Gallery Books (GMC)

An anthology of essays accompanied by beautiful black-and-white photography from a diverse group of women on the time they learned to fight for themselves.

In My Moment, Gloria Steinem tells the story of how a meeting with writer Terry Southern drew blood. Carol Burnett shares how CBS discouraged her from pursuing The Carol Burnett Show, because comedy variety shows were "a man's game". She enforced her contract option anyway. If CBS had had their way, she would have instead starred in a sitcom called Here's Agnes. Joanna Gaines reveals how coming to NYC as a young woman helped her embrace her Korean heritage after enduring racist bullying as a child. Cyndi Lauper shares how her mother's struggles inspired her classic song, "Girls Just Wanna Have Fun." Author Maggie Smith details a career crossroads when her boss declined her request to work from home after the birth of her daughter and she quit and never looked back.

Over and over again, when told "no" these women said "yes" to themselves. This hugely inspiring, beautiful book will move people of all ages and make them feel less alone. This is the perfect gift for every woman in your life.

We Had To Remove This Post by Hanna Bervoets, Harper (DJJS)

Kayleigh needs money. That’s why she takes a job as a content moderator for a social media platform whose name she isn’t allowed to mention. Her job: reviewing offensive videos and pictures, rants and conspiracy theories, and deciding which need to be removed. It’s grueling work. Kayleigh and her colleagues spend all day watching horrors and hate on their screens, evaluating them with the platform’s ever-changing terms of service while a supervisor sits behind them, timing and scoring their assessments. Yet Kayleigh finds a group of friends, even a new love—and, somehow, the job starts to feel okay.

But when her colleagues begin to break down; when Sigrid, her new girlfriend, grows increasingly distant and fragile; when her friends start espousing the very conspiracy theories they’re meant to be evaluating; Kayleigh begins to wonder if the job may be too much for them. She’s still totally fine, though—or is she?

From the poet, novelist, and cultural icon behind the award-winning and extraordinary Broadway play, for colored girls who have considered suicide/when the rainbow is enuf, comes “a kaleidoscopic journey through black womanhood” (Publishers Weekly, starred review) and a moving bilingual collection of new and beloved poems.

In this stirring collection of more than sixty original and selected poems in both English and Spanish, Ntozake Shange shares her utterly unique, unapologetic, and deeply emotional writing that has made her one of the most iconic literary figures of our time.

With a clear, raw, and affecting voice, Shange draws from her experience as a feminist black woman in American to craft groundbreaking poetry about pain, beauty, and color. In the bestselling tradition of Rupi Kaur’s Milk and Honey, Wild Beauty is more than a poetry collection; it is an exquisite call to action for a new generation of women, people of color, feminists, and activists to follow in the author’s footsteps in the pursuit of equality and understanding. As The New York Times raves, “Ntozake Shange writes with such exquisite care and beauty that anyone can relate to her message.” The Hidden Kingdom of Fungi: Exploring the Microscopic World in Our Forests, Homes, and Bodies 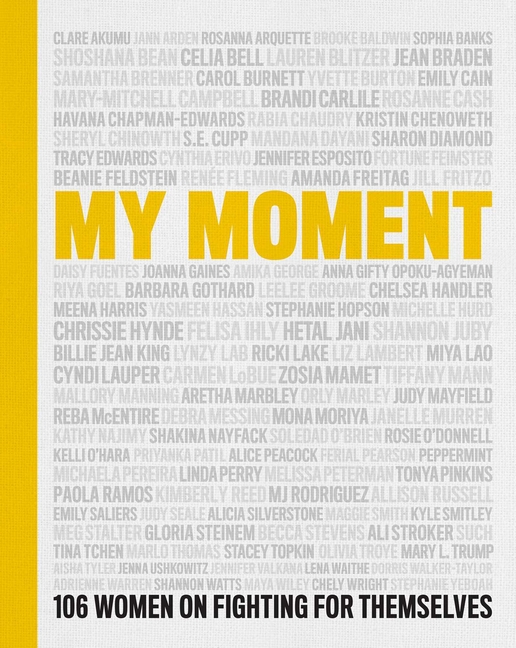 My Moment: 106 Women on Fighting for Themselves