The 2019 Porchlight Business Book of the Year is Rana Forhoohar's "penetrating indictment of how today’s largest tech companies are hijacking our data, our livelihoods, our social fabric, and our minds."

We are proud to announce that the Porchlight Business Book of the Year for 2019 is Don't Be Evil: How Big Tech Betrayed Its Founding Principles—and All of Us (Currency) by Rana Foroohar. The award was presented at our annual industry gathering at the Freehand Hotel in New York City.

“For many years, the mantra echoing from Silicon Valley has been one of disruption. And disrupt they have, as Rana Foroohar’s Don’t Be Evil well explores,” said Owner, President & CEO Rebecca Schwartz of the award-winning book. “With some of the finest business reporting and writing of the year, this year’s Porchlight Business Book Award winner thoroughly documents the results of that disruption, making it essential reading for those who wish to understand both the daily news and its broader implications.”

“That the best book of 2019 came out of the Current Events and Public Affairs category should be no surprise,” added Editorial Director Dylan Schleicher. “There are many important and exigent discussions we need to have in the business world and as a society—about the health of individuals, organizations, and our overall economy, about the rise of economic inequality and decline in innovation, about the credibility of the information we receive and the durability of our democratic institutions—and all of them are tied in a big way to the rise of Big Tech. There are many books that covered these developments this year, but Rana Foroohar’s examination of the industry and its effects on our world is the most well rounded, all-encompassing, and even handed of them, which is why we’ve named it the Porchlight Business Book of the Year.” 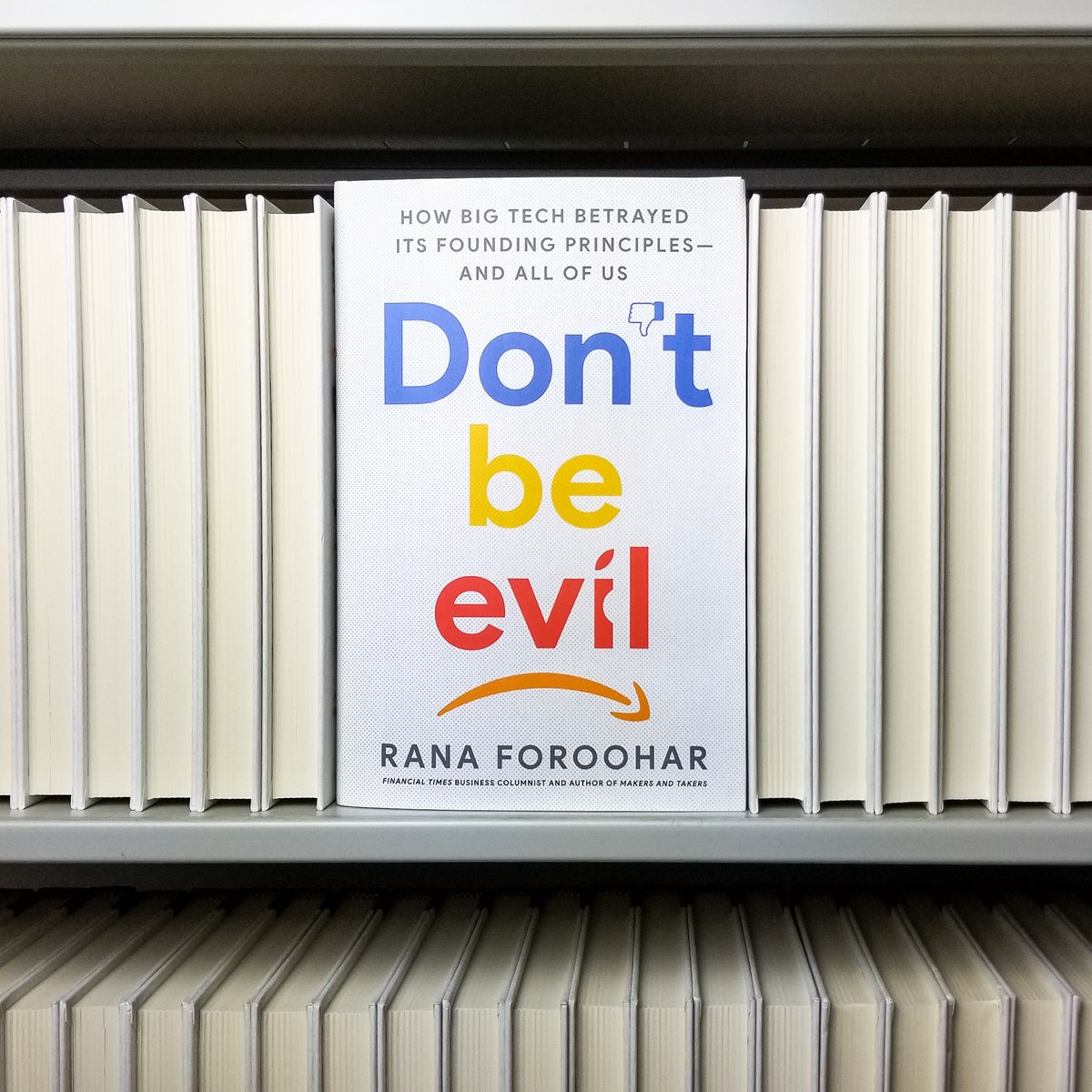 Silicon Valley has always painted its intentions in a utopian hue: to connect humanity, democratize access to information, to disrupt an old order of entrenched power and usher in a new, more equitable and innovative age. But, as Foroohar lays out in Don't Be Evil, “the supposedly decentralized Internet economy has spawned a handful of ruthless oligopolies that have begun to use their power to undermine start-up growth, job creation, and labor markets.”

In many ways, developments in Big Tech mirror those in the nation's financial institutions that led to the Great Recession—documented so well in Foroohar’s previous book, Makers and Takers—that were also sold as an opportunity for innovation and a new economy that ended in a similarly increased concentration of wealth and risk, political clout and privilege, and a lack of any real accountability.

But Foroohar doesn’t just point out the many transgressions coming out of Silicon Valley and the challenges they pose to us as a society, she also offers solutions, from a “national commission on the future of data and digital technology” to a digital New Deal to ensure employment and “remake the real economy for the digital age.”

Rana Foroohar is a global business columnist and an associate editor for the Financial Times and CNN’s global economic analyst. Her previous book, Makers and Takers: How Wall Street Destroyed Main Street, was shortlisted for the Financial Times and McKinsey Business Book of the Year award in 2016. For 13 years, she was an economic and foreign affairs editor and a foreign correspondent at Newsweek. During that time, she was awarded the German Marshall Fund’s Peter Weitz Prize for transatlantic reporting. After this, Foroohar worked at Time for six years as an assistant managing editor and economic columnist. She has earned awards and fellowships from institutions such as the Johns Hopkins School of International Affairs and the East West Center. Foroohar is also a life member of the Council on Foreign Relations. A graduate of Bernard College, Columbia University, she now lives in Brooklyn, New York.