Inside the Longlist: The Best Big Ideas & New Perspectives Books of 2017

Wrapping up our look inside the books on our 2017 awards longlist, we take a peek at the books in the Big Ideas & New Perspectives category.

Ryan Schleicher, who works in sales and author services here at 800-CEO-READ, curated the exploration of the Big Ideas & New Perspectives category, just as he has for the past few years. And, last year, he wrote what I think is the simplest and best explanation for why we have such a category: “People reading business books aren’t doing so because they want to repeat their steps day in and day out. We read them to change or to make change.” These are, he said, “the books that have the most potential to not only change a company or industry, but to change the world on a grand scale.” These five books, though diverse in focus, all fit that ambitious mold.

What happens, then, when wearable devices increasingly become implanted devices, when the "Internet of things" includes our very selves? What happens when inequality advances to a degree that there are not only economic classes, but biological castes, when there exists a "small and privileged elite of upgraded humans?" What happens when we lose an interest in our own authenticity, and give into the easy life of automation and biochemical alteration to make our desires align with whatever is most productive and painless? What happens when people become "just another designer product?" What happens when we worship data over all else? What happens when free will is simply no longer practical? These are just some of the questions at the heart of Yuval Noah Harari’s Homo Deus. And they are not questions about the future so much as about our current trajectory toward it. He prompts all of us—but especially politicians, economists, and scientists—to question the emerging data-centric view of the world, and leaves us with three fundamental questions at the end, one of which is: "What's more valuable—intelligence or consciousness?" He raises both.

Andrew McAfee & Erik Brynjolfsson’s breakout book, The Second Machine Age, provides three lenses with which to view how technology is changing business today, and how we might use them. There new book delves deeper into how to implement them in business. These three lenses—machine, platform, and crowd—have their counterparts: the human mind, products, and the core of one’s business. (The core is the “knowledge, processes, and capabilities that companies have built up internally and across their supply chains.”) There is no perfect balance suggested between mind and machine, product and platform, core and crowd, but the world is certainly shifting in favor of the latter in each case. It is up to you to figure out where on that continuum you currently are, and where you might begin the shift to take advantage of the technologies now at your disposal. And, in addition to documenting the breathtaking advances happening in artificial intelligence and robotics, Machine, Platform, Crowd is also a crash course in the basics of business, with lessons on demand curves, network effects, price elasticity, total cost economics, and how they all interact in the marketplace. It is written with real human intelligence, concern, feeling, and values. It is a big, intense, always interesting, and almost intimidating book—and well worth the effort.

The Power of Onlyness: Make Your Wild Ideas Mighty Enough to Dent the World by Nilofer Merchant, Viking

In a category dedicated to big ideas and new perspectives, we run the risk of pulling out too far, of opening the aperture so wide that we lose focus on an important fact: that each of these big ideas and new perspectives begins in an individual mind. Nilofer Merchant reminds us that there is something unique in all of us that the world would benefit from—if only we can bring it into the world. Merchant reminds us that the world needs our unique perspective, and that the next big idea could be ours, and helps us move from idea to impact. But it is not a solo journey, or a self-absorbed process. Our general manager, Sally Haldorson, wrote of the concept:

Onlyness—the word itself—conjures up for some the idea of a singular hero. But the underlying power of it follows the duality inherent in the word “individual,” which is the smallest member of a group. An individual is therefore never isolated; he is always connected. Onlyness contains a similar duality: it is born of you and unites you meaningfully with others; it is the connected you.

The brilliance of Merchant’s guidance is that it forces us to go deep within ourselves, and into the world at the same time. Borrowing again from Sally, it is a call to “identify what is good in ourselves and to connect with what is good in others so that, together, we can indeed dent the world.”

Scale: The Universal Laws of Growth, Innovation, Sustainability, and the Pace of Life in Organisms, Cities, Economies, and Companies by Geoffrey West, Penguin Press

Geoffrey West begins his new book, Scale, with a simple enough statement: “Life is probably the most complex and diverse phenomenon in the universe, manifesting an extraordinary variety of forms, functions, and behaviors over an enormous range of scales.” Over 450 pages later, the reader will leave with a more keen understanding of what the metabolic rate of animals may have to do with the growth (and increasing efficiency) of cities and companies as we move from the Anthropocene to the Urbanocene. West is a theoretical physicist who focuses on biology and sustainability, and his examination of the complex organizational and social structures of the modern world bridges social science and economic theory, helping us better grasp our own “daily participation in socioeconomic activity.” In so doing, the idea that commerce, culture, and the economy, like biological life itself, are all “ever-evolving complex adaptive system[s].” If you’d like the scientific underpinning of  why the pace of life seems to be exponentially accelerating, his work toward a science of cities and companies will provide it.

Sensemaking: The Power of the Humanities in the Age of the Algorithm by Christian Madsbjerg, Hachette Books

Christian Madsbjerg believes we are in danger of losing something fundamental in the rush to embrace data and an algorithmic way of thinking—if not our humanity, then our faith in the humanities to help us shape our understanding of the world. In doing so, we lose context. His new book, Sensemaking, does not decry data, so much as it argues for a more holistic approach to gathering and interpreting it. It doesn’t argue against a STEM education so much as it champions a liberal arts one. It argues that, in a world where emotional intelligence and cultural understanding are more important than ever before, we need the humanities. Original ideas require openness and grace more than will, even if they are the result of painful deliberation, and require will to apply. Do not discount the data, but do not discard your ability to see beyond it, either. We need to be able to read both a novel and a spreadsheet to be successful in today’s world. We need to be able to make sense to make meaning, to have a perspective, and point of view, to make progress. 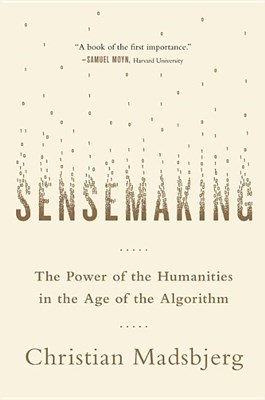 Scale The Universal Laws of Growth, Innovation, Sustainability, and the Pace of Life in Organisms, C 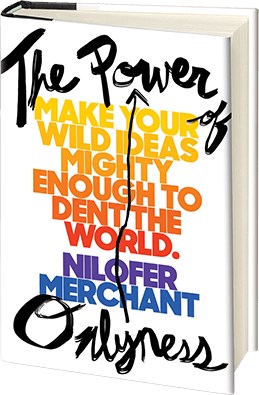 Power of Onlyness: Make Your Wild Ideas Mighty Enough to Dent the World