The Advantage is a smart, quiet book. The valedictorian of the business book class of 2012 whose extracurricular is the chess club rather than debate or pep. The title and cover are straightforward.

The Advantage is a smart, quiet book. The valedictorian of the business book class of 2012 whose extracurricular is the chess club rather than debate or pep. The title and cover are straightforward. The message isn't about making millions of dollars, turning the ship around, inspiring innovative excellence, breaking all the rules. Instead, the message is about prevention, about laying a solid groundwork of internal health to avoid the extremes mentioned above. To venture into a different metaphor, The Advantage is about eating your veggies, sharing a dessert rather than eating the entire slice, and taking a walk around the neighborhood each morning, rather than auditioning for The Biggest Loser to make a drastic and last-ditch change.

The single greatest advantage any company can achieve is organizational health. Yet it is ignored by most leaders even though it is simple, free, and available to anyone who wants it.

Despite its sensible qualities, or rather because of them, we are passionate about the importance of this book and recommend it to every manager or business owner who wishes to prevent organizational disease, rather than treat the symptoms when it's already too late to stop the spread. We love it's prime message of attending to the little things, so there aren't so many BIG things to contend with. And Patrick Lencioni, one of the biggest names in business books, is the right person to show you how to attain organizational health--nay, organizational excellence--and prevent the dysfunctions that come from such internal parasites as politics, unresolved conflict, confusion. Like anything that's valuable, an organization's health takes some working at. The payoff? Transformation.

An organization has integrity--is healthy--when it is whole, consistent, and complete, that is, when its management, operations, strategy, and culture fit together and make sense.

Lencioni values management and so he begins his thesis with this foundational truth: management affects every aspect of a company. He explains that he learned from an early age "that some of the things that took place in the organization where I worked made sense, that others didn't, and that it all had a very real impact on my colleagues and the customers we served." And management's contribution to the welfare of every person connected to the company intrigued him, leading him down the career path of writing books that offer practical solutions to solving persistent management problems.

An organization doesn't become healthy in a linear, tidy fashion. Like building a strong marriage or family, it's a messy process that involves doing a few things at once, and it must be maintained on an ongoing basis in order to be preserved.

The first thing companies must do to attain organizational health is decide that organizational health is worthy of their attention. Leaders "must humble themselves enough to overcome the three biases that prevent them from embracing it." Managers must then commit to practicing the 4 Disciplines: Lencioni closes the book by spending some time with one of his favored topics (see his bestselling Death by Meeting): the meeting. Meetings cannot and should not be eliminated, Lencioni asserts, but they can be regulated. He suggests establishing four types of meetings--administrative, tactical, strategic, developmental--that are held at specific times or to solve specific problems. Both employees and leaders then know exactly what they are getting into and what is expected of them.

As dreaded as the "m" word is, as maligned as it has become, there is no better way to have a fundamental impact on an organization than by changing the way it does meetings.

As may now be apparent, with The Advantage Lencioni leaves his preference for fable writing (e.g. The Five Dysfuntions of a Team, The Five Temptations of a CEO, and one of our favorites, Getting Naked) behind. There are no fictional characters and narrative this time around, and while we'll miss Lencioni's talent for telling engaging tales, The Advantage still sings with the tenor of Lencioni's accessible and generous voice. The book is well-stocked with straight-forward advice about getting things right in your organization before they become wrong. Because if, or rather, when, things do go wrong as they are apt to in the life of a company, the organization's health will be strong enough to withstand and endure the assault. Therein lies The Advantage, and why we chose this book as our 2012 Book of the Year. (To revisit this year's book awards, as well as those from previous years, click here.)

The Advantage: Why Organizational Health Trumps Everything Else in Business 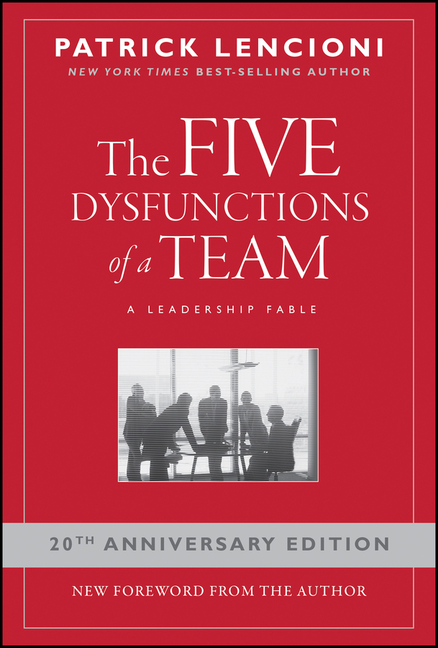 The Five Dysfunctions of a Team: Team Assessment

Getting Naked: A Business Fable about Shedding the Three Fears That Sabotage Client Loyalty