The 2018 800-CEO-READ Business Book of the Year is Anand Giridharadas' diagnosis of "how the global elite's efforts to 'change the world' preserve the status quo and obscure their role in causing the problems they later seek to solve."

When we announced our shortlist for the 2018 800-CEO-READ Business Book of the Year, which included Winners Take All: The Elite Charade of Changing the World, the book’s author Anand Giridharadas took to Twitter with the following remark:

The employee who elevated it here at 800-CEO-READ during our awards process was our marketing director, Blyth Meier, who oversaw our Big Ideas & New Perspectives category this year. And, I can assure you that, while she is brilliant and constructive, she ain’t no troll. She simply believes—and we as a company believe—that books that expose the negative effects of big business interests and the billionaire class that drives those interests are as important to the understanding of business and as important to the business book genre as those that people traditionally think of as a “business book.”

We believe each of these kinds of books can make the business world better—either by exposing the inadequacies of business approaches to the world’s problems, and the injustices and inequalities it can perpetuate, or by showing us how we can better manage, market, sell, and lead our own organizations, or how to think about and rethink them. All of which is a long way of saying that, of course we think Winners Take All is a business book, one we would strongly encourage everyone to read. Which is why we have named it the 2018 800-CEO-READ Business Book of the Year.

We’re not trolling anyone with this choice; we’re telling everyone we can that this book is really important.

As Blyth wrote of the book:

During this time of unprecedented inequality, [Giridharadas] challenges the viewpoint that one can address societal ills while preserving the system that brought them about. If philanthropists really want to address poverty, why do the businesses that made their foundations’ fortunes fight against workers rights? If CEOs advocate for stable democracies overseas, why do they avoid the taxes that would strengthen our government at home? If entrepreneurs bill themselves as the ultimate “changemakers” in our society, why do they claim that fundamental change in our public institutions is impossible? Laying bare the myths and failings of elites across the political spectrum, Winners Take All provides a clarion call to challenge the current power structures and re-engage in the habit of democracy.

We’re naming Winners Take All as our book of the year for the same reason we named Too Big Too Fail, What Works, and Janesville as the book of the year in the past. I imagine it’s why the Financial Times and McKinsey chose Bad Blood, about the rise and fall of the fraudulent blood-testing company Theranos, by John Carreyrou as their business book of the year this year. Writing for FT, Andrew Hill shared the judges’ thoughts:

They said that it raised questions not only about the culture at one start-up—at its high point valued at more than $9bn—but in the whole of Silicon Valley.

Giridharadas raises questions not only about that culture, which so dominates the culture of American capitalism today, but of the supposed “win-win” culture of a system that allows today’s New Gilded Age billionaires to accumulate so much wealth, and then expresses gratitude to them when they “give” some of it back through philanthropic entities that serve as much (if not more) to perpetuate their own influence and power as they do to truly help people.

If businesses truly want to do good in the world, perhaps they should just focus on serving their customers and taking care of their employees. Perhaps they could stop avoiding taxes, and asking for what amounts to bribes from local governments to create jobs in their states and municipalities. As Giridharada recently wrote “Every billionaire is someone who could have paid higher wages or taxes if we chose to require that.”

We are at an inflection point in society. Global business elites bemoan the fact that government is broken, but under our current campaign finance laws, they are the ones with the most power to fix it. And they’ve “fixed” it in the wrong direction. So it’s especially helpful when someone like Giridharadas, who has had access to that rarified world of the global business elite as a former McKinsey analyst, Aspen Institute Fellow, and TED Talk speaker, is able to maintain an outsider’s perspective on it, and draws back the curtain on the ways its “entrepreneurship-as-humanitarianism” approach to changing the world is actually changing nothing—but perpetuating the injustices and inequalities of a previous era. Pundits have suggested the book doesn’t offer real solutions, that it’s a “burn it all down” kind of book. I would disagree. The solution is awareness and knowledge. The solution is to become a caring, compassionate, and thinking individual connected to the community around you. The solution is not to burn it all down, but to work together and build up—in the way that the the freshman class of the United States House of Representatives did on the campaign trail. The solution is to reopen the government and get back to work. The solution, as our marketing director Blyth Meier wrote, is to re-engage in the habit of democracy. 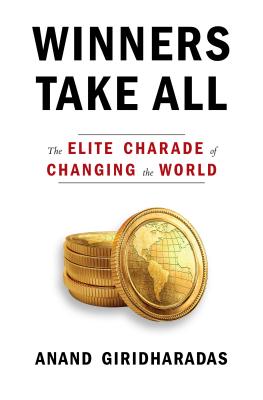